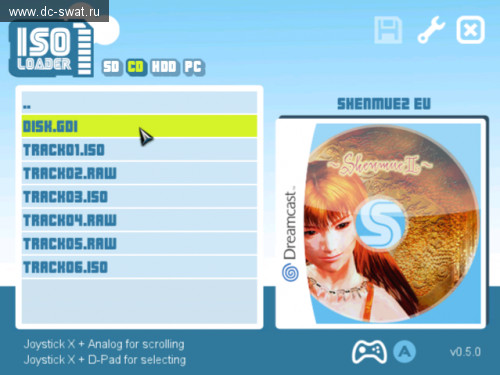 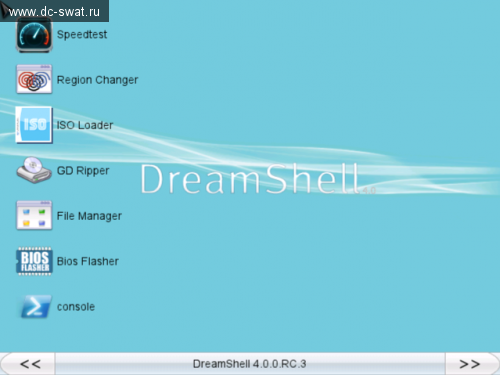 Significantly increased the rate of initial setup and initialization, as well as the entire nucleus as a whole
Increased download speed applications
Fixed some graphical artifacts Updated and corrected file system support FAT.
Updated library fatfs
Increased speed of reading from and writing to G1-ATA (IDE) devices in DMA mode on the file system FAT.
Fixed bug with writing to SPI and SD Card drivers.
Fixed some bugs with the drop-down console, including those from which she was not completely closed, thus blocking the main interface.
Increased sensitivity of the cursor GUI for Dreamcast Mouse
Other optimizations, improvements and bug fixes in different parts of the system Kernel modules and the team gathered on the GCC 4.9.1 compiler with Newlib 2.0.0 and the latest version now KallistiOS

Added support for additional formats (bmp) icons for browser File Manager
Added support for copying the entire directory (indicated by B button on the joystick, or right-click)
Minor fixes and optimizations

Improvements in the GUI
Fixed bugs and improved performance

Support for the new module functions isoldr
Added additional addresses for downloaders
Revision control emulation asynchronous read
Displays the name of the game on the cover
Increased the size of icons to go to the settings and close the application
Revised and corrected saving and loading settings (presets) for each game. Now they can share with other users, as they are not tied to the path to the image on the device
Automatic adjustment of the default settings for different types of BIOS
Automatic adjustment of some parameters on the choice of the user in the settings

Increased speed By default, the menu does not appear, and immediately loaded core, if at the beginning you do not press START.
BIOS Updated all current types of BIOS (as in the previous version). The problem with Holly protection has not yet been solved.
ISO loaders Faster and more compact code by hand and new compiler optimizations
Improved emulation of system calls GD-ROM, now it is most similar to the original
Added experimental support for emulation of other system calls, which is automatically activated when the loader is available at 0x8c000100.
Added experimental support for emulation play CDDA audio. Supports RAW formats and WAV tracks PCM / ADPCM 4/8 / 16bit 22 / 44kHz mono / stereo. Is also supported by the playback of tracks from CDI images.
Fixed startup mode with IP.BIN, now it can be used for any game with any BIOS
Added a new startup mode with a truncated IP.BIN. This makes it possible to place the boot loader on the standard address 0x8c004000, which increases the compatibility of games with sd_loader_with.bios. And those games that will not start so you can start with a full IP.BIN + 0x8c000100. All this makes it compatible with games for sd_loader_with.bios similar to the original BIOS!
Increased speed of memory Increased speed of execution images
Improved support for DMA Games for G1-ATA (IDE) and GD-ROM. Now with DMA is significantly more games (about 50% can more)
Added support true async (real asynchronous read) for DMA on devices G1-ATA (IDE) and GD-ROM for optimized GDI and ISO images. It is automatically used if the mode DMA, disabled emulation asynchronous read and the image runs with sector size 2048

Games in this mode go as smoothly as possible, as with the original GD-ROM Added support for pseudo-async for SD Card. Now when emulation is enabled asynchronous read and used the image with the size of the sector in 2048, data from the SD Card is requested only once, and then each frame, read part of the developed controller SD Card data, equal to the number of sectors emulation. Previously, the data requested each frame, resulting in some loss in overall speed due to unnecessary actions. This function is also used to play CDDA tracks. Increased reading speed SD Card due to not check CRC. That's roughly 10% the speed of which you can see in the appendix Speedtest for your SD Card Improved emulation of asynchronous read. Now for large data packets (more than 100 sectors at a time), it is temporarily turned off to speed up the initial load game resources Improved support for start-up images with the GD-ROM Added support for running homebrew scrambled binary. To activate the auto determination encrypted binary must be selected in the settings of OS Homebrew. Improved compatibility with games. Now 90% of cases, if the game does not start, it is likely that it uses a MMU (not only WinCE use it), the remaining 10% are exceptional cases. As soon as I manage to solve the problem with the MMU, the overall compatibility will be at the level of 95-99%. But, unfortunately, the problem is with an MMU, since I basically have not yet engaged in the solution. Recommendations If you want to use CDDA on SD Card, then I recommend to convert PCM tracks in ADPCM, to make it as small as possible drop in FPS. But in some games, you might as well use the original PCM. To convert the tracks have new tools to ISO Make pack v2.3 To achieve maximum benefit from the use of G1-ATA device with a true async DMA or pseudo-async on SD Card, it is recommended to use the images or ISO format optimized GDI. Otherwise, in the format of images CDI or optimized GDI, while reading data to be used by the usual emu async. Acknowledgements Big thanks to the authors of the emulator Demul - Wind and MetalliC for help in solving some of the problems and provide the necessary information.